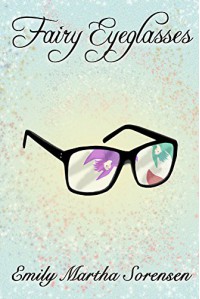 This is a cute concept, and seeing how I'm reading stories aloud to my son, I thought I'd give this a go.

Cassie finds a pair of glasses during a sleepover. They look a lot like hers, but they have an incredible ability - they allow her to see fairies. She hates to give them back, but convinced they must belong to fellow party-goer, Bianca, she seeks her out. But Bianca says they aren't hers. Cassie keeps looking, and though the fairies largely ignore her, there are some that pop up that seem to want something from her.

I have to say, I wasn't terribly impressed, though I love the premise and the idea that there are multiple magical items that allow you to sense fairies. Maybe I'm just not cut out for reading middle grade stories, because it just felt a bit patronizing. At a few points, Cassie tells others about the glasses, but though no one else can use the glasses, they end up believing Cassie, which I find a little unbelievable, though I suppose it sends a good message. The story was okay, but the end was a bit of a let-down. Overall my impression wasn't great, but you can judge for yourself.
Tweet