Falling For Your Madness 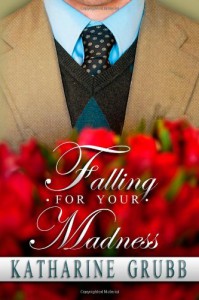 I thought this story was delightful.

Laura is disenchanted with her current relationship--or lack thereof--when David arrives on the scene. He's interested in her, handsome, and along with his driver, quite a quirky man. He makes a proposal: They should start as friends, and if she so chooses, they can progress along the romantic chain from sweethearts to fiances to husband and wife. There's plenty of rules, which can be both exciting and frustrating. Laura comes to several crossroads along the way. Will she choose David or leave his madness behind?

I found the story to be quite humorous. I mean, the man is living by a certain code of chivalry, sitting on his hands and reciting poetry when riding through a dark tunnel and challenging uncaring old boyfriends to duels. What's not kind of hilarious about that? The pacing is good, and the characters are intriguing. There's even some hints of magic in the whole thing, and a legend to boot. The only thing I question is one scene where the rules are broken for the sake of an injury (much to David's protest), and he becomes, very oddly, not himself. I didn't feel like that was explained to my point of satisfaction, so there's that.

Regardless, I thought it was funny and moving, and I loved all the peculiar rules that David is bound by. The only thing that would have made it better (for me) would have been for the magic element to be either confirmed or denied, and that one scene addressed more fully. Otherwise, totally recommended read, especially if you love love. :)
Tweet