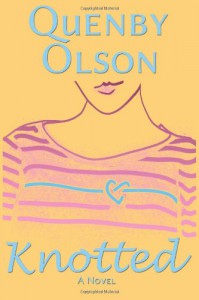 I've had this in my wheelhouse of to-reads for a while and finally got around to it. I found it rather enjoyable, shirking my duties once or twice to race to the end.

Livi is an awkward almost 18 year old who spends most of her time in Pennsylvania with her mom, and some of her time across the pond in England with her father. When a summer visit with her father coincides with a wedding, to a woman her father has never mentioned, who just happens to be a few years older than she is, Livi's sense of awkwardness skyrockets.

Her dad's girlfriend, Emmy, is adorable, and takes right to Livi, subjecting her to all the feminine rituals Livi has spent her life avoiding. To make matters worse, Emmy's brother, Ian, keeps popping up, and he's as frustrating as he is handsome.

With the wedding winding down and a lie that threatens to spoil her father's happiness, Livi must make a bold move to find the truth in herself and in those around her.

I have to say, despite a good setup and believable reactions on Livi's part, I found it easy to see past the false impressions. Livi and her dad are both beautifully awkward, and Ian sure presents a tantalizing character. I loved the story, really, and only knocked it a star because the ending was just a shade shy of satisfying and you can't give 3/4 stars. *sigh* Don't get me wrong, the ending was good, but it felt like a hanging chad - you know what they're going for, but they didn't quite complete the selection. Other than that, a very entertaining read that I would gladly recommend to young adult readers who'd like to see a contemporary version of Pride and Prejudice.
Tweet